Suitcase murderer Heather Mack arrested on arrival in the US 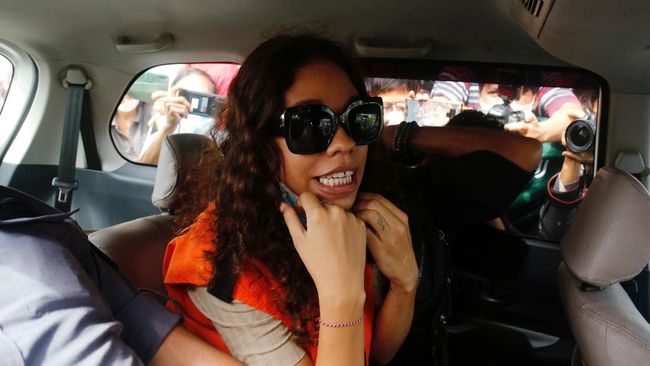 American citizen Heather Lois Mack, who was one of the convicted killers of her biological mother in Bali in 2014, arrived back in Chicago, yesterday, after being deported from Indonesia. On arrival she was immediately arrested by local authorities.

Mack is scheduled to appear in a Chicago court today. If convicted, she faces a maximum sentence of life imprisonment for charges one and two, and 20 years in prison for counts three and a fine of up to $250,000.

In 2017, a US jury found Mack and her boyfriend of the time, Tommy Schaefer planned to kill Von Wiese-Mack before they left for Bali. It was found Schaefer had asked her cousin, Ryan Bibbs, how to kill her mother.

The US Department of Justice said at the time that Mack asked Bibbs if he knew of a hitman who could kill her mother. Mack pleaded guilty in December 2016 to one count of conspiracy to commit the foreign murder of a US citizen.

Mack was officially deported from Bali with her daughter with the initials ES on Tuesday (2/11) under tight security from the Denpasar police and the FBI through I Gusti Ngurai Rai International Airport.

Head of the Regional Office of the Ministry of Law and Human Rights Bali, Jamaruli Manihuru said Mack and her son will be put on a deterrence list with the Immigration Department.

“Heather Lois Mack was proven to have violated Article 75 of the Republic of Indonesia Law Number 6 of 2011 concerning Immigration in conjunction with Article 340 of the Criminal Code on Murder,” he said.

Mack was arrested by the Kuta Police for the alleged murder of his biological mother, Sheila von Wiese-Mack, at the Saint Regis Hotel, The Nusa Dua tourism area.

On August 11, 2014 Mack’s boyfriend Tommy Schaefer came to the hotel.

During the ensuing fight, Tommy Schaefer hit Sheila von Wiese-Mack until she passed out and lay in bed. It was suspected that the mother was injured in the nose and died because the blood flowed into the internal organs, blocking her breathing.

Schaefer testified at his trial that von Wiese-Mack was angry when she learned about her daughter’s pregnancy and tried to strangle him, prompting him to strike her with a metal fruit bowl.

“Discovering that her mother had died, Heather Lois Mack took the initiative to put her body in a suitcase and take it away,” said Jamaruli.

According to press reports of the time Mack helped Schaefer stuff her mother’s body into the suitcase by sitting on it to enable Schaefer to close it. They then placed the suitcase in the trunk of the taxi at the lobby of the St Regis hotel and told the driver they were going to check out and would return, but they never did, prosecutors said. The bloodied body was discovered and the couple were arrested the next day.

Mack received a sentence of 10 years in prison for violating Article 340 of the Criminal Code on Murder in the Denpasar District Court (PN) on July 9, 2015. Schaefer is still serving his 18 year sentence in Kerobokan jail.

While in Kerobokan Prison, Mack gave birth to a daughter with the initials ES on March 17, 2015.